It’s been a while since I’ve updated the site with any purchases that I’ve made in my portfolio. This is because for a lot of this year, the only buying I was doing was in my Vanguard retirement account, which is completely handled by my job.   A lot of what I’ve been doing has been paying down more student loan debt (at least the higher interest loans), of which I’ve knocked down 21% of the balance in the past year. Then also, I was in a holding pattern for a few months while planning and saving for an aborted two week trip to Greece, which became me heading to Las Vegas recently as a replacement. Well, now I’m back and focused in on continuing to build my passive income through my websites, ebooks, and of course accumulation of dividend paying stocks. This week, I dipped my toe into Nike stock. 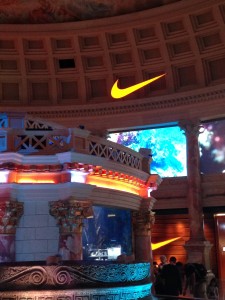 The projected forward dividends from this purchase totals $6.40. A very low yield on Nike stock and doesn’t even cover the commission that I paid. However, I haven’t paid very much in commissions on any of my portfolio holdings by using free credits from Capital One Investing (they had a lot more promo codes back before Capital One bought Sharebuilder), investing with No-Fee DRIP plans, and using a site like Loyal3 for specific purchases. Also, since Nike is on Loyal3, I can invest further for free. It’s just that I had cash in that brokerage account and wanted to use most of it.

Anyways, Nike is currently trading in its range of fair value, in my opinion. It isn’t a mega bargain or anything but it is at a price which I feel comfortable paying for a long term holding. Obviously, I’d love it if the price were to drop even more and get me something more than a roughly 1.2% starting dividend yield but I’m not going to wait to start taking action, when I can get a fair deal right now.

Nike’s earnings have increased by double digits while the stock price has fallen towards its 52 week low and really a low that’s equivalent to the price in early 2015. Not only that, when you take a look at increases in revenues in specific regional sectors such as Western Europe apparel and footwear sales in China, Nike has increased these sectors by 20+% on a constant currency basis. Let’s keep in mind that earnings for many multi-nationals are still understated by 5-10% due to currency disparities. Over time, that should even out but I’ll take my chances with Nike until then. It’d be awesome to pick up more shares at around $40 each but I’m not waiting around for it to happen.